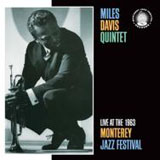 This recording is so fresh and alive sonically and so rich and rewarding musically that forty-five years literally melt away upon hearing it. One doesn't know whether to express gratitude to the producers for releasing a recorded event of such historic significance and rare beauty, or annoyance at those responsible for keeping it on ice for all these years. In any case, it's music that could have been recorded yesterday, assuming a cast like this one could be reassembled.

Another example of what is known as Davis' "transition period" (1960-1964) between his &#34first great quintet," with tenor saxophonist John Coltrane, and "second great quintet," with Wayne Shorter, the playing is good enough to make a listener wish the transition had lasted indefinitely. First, there was the fascinating contrast between Davis' free approach and reedman Sonny Stitt's systematic bebop vocabulary, then there was Davis' sophisticated urbanity contrasting with the musky, bluesy, unashamedly soul-baring tenor of Hank Mobley, and here it's the restless and searching Davis vs. the pure, open sound and "singing" approach of tenor saxophonist George Coleman.

On the opening "Autumn Leaves" Davis, on harmon-muted trumpet, conducts a Hamlet-like, alternately meditative and morosely malcontent dialogue with his 23 year-old pianist Herbie Hancock who, quickly reacting to some hints from bassist Ron Carter, provides harmonic substitutions that momentarily reshape the tune's character. At the completion of the trumpeter's turn, Carter and 17 year-old drummer Tony Williams release the ever-mounting tension with a flowing 4/4 time-stream for the linear and lyrical melodic inventions of Coleman, who transforms brooding soliloquy into extroverted aria.

During Coleman's solo, the interplay between Hancock and Williams is worth the listener's undivided attention in itself, as the pair will adapt a motif in the solo to a shared rhythmic pattern, which in turn redirects the soloist's constructions. A similar empathy and serendipitous coupling extend to a fast and furious version of "So What," which is sufficiently relaxed and free to suggest a suspension of time and tempo altogether.

"Stella by Starlight" is, on this occasion, seen through prismatic colors, with each soloist drawing an evocative portrait of the alluring lady with varied colors and shifting moods, from ethereal and mysterious to teasing and saucy. The blues "Walkin,'" taken at another torrid tempo, opens with a Williams' solo that challenges the blues form itself, while Carter goes to a half-time bowed solo that demonstrates the expressive possibilities attainable through the mathematical permutations of tempo.

The overall sound is spacious yet up-close and vibrantly present, while every note is crystal clear, assuring the listener of catching each detail, from Hancock's delicate voicings to Williams' innovative, often surprising punctuations. Moreover, everyone seems uncommonly committed to swinging and inventive melody- making. By the time of the Plugged Nickel sessions the group would play with a more self- conscious, calculated and cerebral approach to melody (don't give it away), harmony (invent the chords as you go) and time (let it shift, speed up and slow down midstream).

Consider this recording an indispensable addition to one of the most distinguished canons by a major artist in 20th-century music.

Waiting for Miles; Autumn Leaves; So What; Stella by Starlight; Walkin'; The Theme.