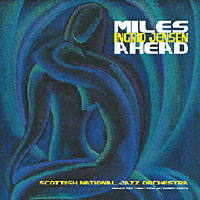 If you’ve ever wondered how those classic Miles Davis / Gil Evans collaborations from the late ’50s might have sounded had Miles laid aside the mute and played open trumpet, here’s a proximate likeness from Canadian trumpeter Ingrid Jensen, accompanied by the excellent Scottish National Jazz Orchestra.

These are Evans’ groundbreaking arrangements, performed in concert with only one brief pause, between tracks five and six. Jensen, to her credit, makes no attempt to imitate Miles, but in keeping with his modus operandi is shaky on several of the melodies and spits out a number of clams, especially on “I Don’t Want to Be Kissed” and Dave Brubeck’s “The Duke.” Her solos, on the other hand, are consistently strong and assertive, and she and the SNJO quickly warmed my heart with a lively reading of John Carisi’s “Springville,” on which Jensen plays flugelhorn.

Jensen switches to trumpet on the meditative “Maids of Cadiz,” which precedes “The Duke,” Kurt Weill / Ira Gershwin’s “My Ship” and perhaps the most memorable of the Davis / Evans collaborations, “Miles Ahead” (again on flugel). After a brief round of applause, the second half of the program begins with Evans’ placid “Blues for Pablo” and continues with Ahmad Jamal’s playful “New Rhumba” (on which Jensen does play muted, sounding not a whit like Miles), Bobby Troupe’s mournful “Meaning of the Blues,” J.J. Johnson’s poignant “Lament” and one last number from the album Miles Ahead, the coquettish “Don’t Wanna Be Kissed.” While that track is listed at 3:52, the last 55 seconds or so consist of well-deserved applause for Jensen and the orchestra.

As the arrangements are the same as on the Davis / Evans albums, so is the instrumentation, with the SNJO using five trumpets, three trombones, bass trombone and rhythm (no piano), two French horns and a tuba but only one saxophone (Laura Macdonald’s alto) complemented by flute, alto flute, clarinet and two bass clarinets. Tommy Smith conducts with awareness and respect, and the ensemble goes out of its way to make its guest feel secure and comfortable.

While some may question the need to reproduce such exemplary music, that very prominence argues for its exposure to a wider audience, which this new album by Jensen and the SNJO may help bring about. And even those who are quite familiar with the original recordings should find enough stylistic variation between Davis and Jensen to make the newer version a pleasurable listening experience.

Springville; The Maids of Cadiz; The Duke; My Ship; Miles Ahead; Blues for Pablo; New Rhumba; The Meaning of the Blues; Lament; I Don