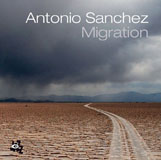 The desert has a story hidden in its eye. Many things take up its plot: the earth, the ever-changing sky, those that pass through it. Antonio Sanchez's debut, Migration, deftly evokes the life of the desert as an allegory for the journey within all of us.

Sanchez climbed to prominence in the Pat Metheny Group, whose eponymous leader adds his talents to his drummer's first work. This is not to imply that Sanchez hasn't made burnished musical relationships of his own. He belongs to a battery of new young voices, two of which contribute to this well-woven tale: Chris Potter (tenor and soprano saxophones), and Scott Colley (bass). David Sanchez (tenor sax) is added to this list of firebirds, and in this case it works particularly well. Another contributor is pianist Chick Corea, who still demonstrates the freshness that has permeated since he emerged with Now He Sings, Now He Sobs. (Solid State, 1968).

Sanchez sports an impeccable musical bloodline. He trained at Boston's Berklee College of Music, as well as the New England Conservatory of Music, as a pianist. This was accompanied by lessons in drumming which eventually won out over the piano. One can still hear its influence; his drumming is no less melodic, demonstrating a range of dynamics and tones under his hands. He's also played with bassist Charlie Haden and the late saxophonist Michael Brecker, to whom this disk is dedicated.

Migration portrays an amalgam of polyphonic images that express the riddles we encounter on this journey and their prismatic answers. Corea's post-bop use of contrapuntal yet resonant angles, Metheny's poignant melodicism, Potter and David Sanchez' playful arguments and Miles' final holographic influence contribute to its sense of evolution.

Yet it bears Sanchez's indelible mark, like the rain on the salt-etched flats of the Argentinean plains on the album cover. Despite his diffidence about composing (see his All About Jazz interview), he appears to have met his own challenge within, a phrase he uses as a song title. Four of the compositions are his; they reflect a graceful intuition borne of devotion to his craft. Is "Did You Get It? a teasing response to Metheny's "(Go) Get It or, even more closely in form, "What Do You Want? —both standards in his mentor's trio repertoire?

But in the quieter moments Sanchez's dynamics really become the soul of the work. A drummer as talented as Sanchez might be tempted to muddy up the space with sound. In "Ballade" and "Greedy Silence" the spaces speak for themselves, making the listener the most effective musician in the pieces, because then the story becomes one's own.

The desert has its own way, sometimes silent, sometimes storm-driven, and not always a journey we would travel, given a choice. It is our own challenge within that often makes us aspire to its proving. But it is in that process, so eloquently delineated in Migration, that we find that we have become richer human beings because of it.