By Richard Hague
November 15, 2002
Sign in to view read count 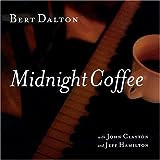 That you visited this site allows us to comfortably draw certain inferences: as you were being born, your parents instructed the Delivery Room staff, "Lay some Jimmy Smith on the speakers. If it's a boy, switch to Maynard; if it's a girl, Carmen." Your ears started off on the right foot.

We may further conclude that, as a teenager, you didn't have much truck with those candy-ass jocks. You knew that A 440 referred, not to a canter around the cinders, but to the frequency to which the oboist should aspire at tune-up time. When you talked about sharpening your axe, it had nothing to do with a Boy Scout Field Trip. That when you used words like "burn" and "chops", you weren't referring to the disaster du jour from Kitchen Arts. When your conversation included the stand-alone syllable "Gee," you were talking about the note above the staff; not the string.

You had, in other words, a perfect, normal childhood.

Therefore, we confidently commend to you a kindred spirit, premier jazz pianist Bert Dalton. You need to become aware of Dalton because he is already an old friend of yours.

Our first mesmerizing exposure to Bert Dalton came in the early '80s in that fabled hotbed; that storied cauldron of mainstream jazz: El Paso, Texas. He was working a dimly-lit outhouse of a joint that reeked of fresh smoke and stale beer. Mammaratudinously-advantaged ladies with teased-up hair sloshed watered-down booze onto tables smaller than a ten-gallon hat.

It was, in other words, a perfect jazz venue.

During the coming years Dalton would co-lead the Chicago Jazz Exchange, tour the U.S., Australia, and New Zealand and record on the CBS label. His quartet, Yoboso, would garner Latin Jazz Album of the Year honors, and he would become a rostered artist with the New Mexico Arts Division and the Arizona Council on the Arts.

Bert Dalton has, with Uber-Sidemen John Clayton and Jeff Hamilton, brewed Midnight Coffee under the Trialog Records marque. The date starts with a cooker: the Dave Frishberg/Johnny Mandel classic, "El Cajon," and moves through the remaining nine tracks tastefully and logically. Four of the tunes are Dalton originals including our personal favorite: the haunting, mystical "Into Your Spell." It could keep you up nights.

The sole standard on the date is Duke Ellington's laid-back blues, "Things Ain't What They Used To Be," and it is joyous. As un-cool as it might have been, I fully expected to hear the guys laughing out loud. At only 6:29, I wish that it had clocked longer. Compliments to Dalton for including Jimmy Rowles' "The Peacocks." Too often overlooked, it's a welcome addition to this lustrous first outing.

With the release of Midnight Coffee, Dalton has established himself as a natural addition to that hallowed and pristine alcove in the Jazz Pianists Hall Of Fame that includes Jimmy Rowles, Alan Broadbent, and Ross Tompkins. He has ear-bending, astounding technique, be he producing single-note icicle-like riffs or nudging, pounding, slathering, patting ten- and twelve-note chords into place. His musicianship is flawless in its conception and delivery. His selection of tunes is impeccable.

Midnight Coffee (Trialog Records), a tour de force collaboration by three giants of jazz with one voice, is of Grammy Award-winning calibre.

El Cajon, Morning Star, Some Other Time, Midnight Coffee, Where The Sea Meets The Sky, Things Ain't What They Used To Be, The Peacocks, Indeed, Into Your Spell, Nobody Else But Me