BY JACK BOWERS
October 1, 1998
Sign in to view read count 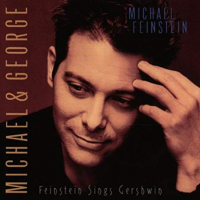 By now, most people who have some knowledge of popular music (the “standards,” that is, not what passes today for popular), know also that Michael Feinstein is, as the sleeve note to Michael & George asserts, “widely recognized as one of the foremost experts [on] and interpreters of [George] Gershwin’s music. ....” On Michael & George those interpretations are, as always, flawless. Michael knows George well, and knows how to describe his compositions and their lyrics (most of them written by George’s older brother, Ira). This is a wonderful compendium of memorable Gershwin melodies, one with which I have only a few minor problems. First, Michael favors slower tempos, which, although clearly a matter of personal choice, don’t always work (as for example on “Of Thee I Sing,” interpreted here as a ballad and thus deprived of its essential energy and spirit). I’d have preferred a bit more heat under others as well, but again, that’s only an opinion, no more — the music itself is lovely. The spiciest item on the menu is “Swanee,” on which George makes a “guest appearance” (thanks to an old piano roll) and solos passionately after Michael’s vocal refrain. Second, the arrangements (by Feinstein, Bruce Roberts and David Tobocman) are often too syrupy, and sometimes threaten to overwhelm Michael’s relatively small, delicate voice. His piano alone would have sufficed — but hey, how often does one have a chance to celebrate Gershwin’s 100th anniversary? May as well add some strings, background vocals and a horn or two! On the plus side, there are several seldom–mined gems here, as one would expect from Feinstein. These include “Nobody But You,” “Lonely Boy” (a song written for but not used in the opera Porgy & Bess, and featuring sumptuous piano work by Stan Freeman), “Oh Gee!–Oh Joy!,” “Delishious” and “Comes the Revolution.” Feinstein also sings the almost–never–heard second verse to “Embraceable You.” Happy birthday, George, from one whose love and admiration for your enormous talents are apparent in every note he plays.

Track listing: Embraceable You; Nobody But You; Our Love Is Here to Stay; Do It Again; Of Thee I Sing; Funny Face; Lonely Boy; Shall We Dance?; Oh Gee!–Oh Joy!; Delishious; (I’ll Build a) Stairway to Paradise; Love Walked In; Comes the Revolution; Soon; Swanee (55:28).