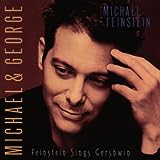 Predominantly composed with the warm and familiar intimacy of his famed cabaret sets, Michael Feinstein’s latest release panders a bit to the popular and loses some credibility in the process. A noted expert on the life, times and music of Mr. Gershwin who has performed this material many times before, Feinstein fittingly joins the throngs paying tribute to the centenarian songwriter with this set of fifteen selections, including one on which George himself provides the instrumentation (by way of one of his famous piano rolls).

Though he may be known as the contemporary keeper of the Gershwin standard, Michael allows George’s legacy to flag somewhat. Instead of treating these timeless songs with the standard simplicity they deserve, Feinstein opts for touches of the bastardized "smooth jazz" format, including percussion tracks and other synthesized lines which actually deteriorate the album’s synthesis. Though most of the album is lovingly concocted and tasteful, the few divergences leave an aftertaste which may not be pleasing to the savvy Gershwin or Feinstein fan.