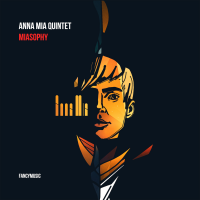 Kiev is the capital of Ukraine sitting uncomfortably between Europe and Russia on the Black Sea. A finance package with Europe was switched to financing from Russia. People took to the streets and the president left town for a long trip to Russia, which then annexed the Crimea. This is not the plot of a Gilbert and Sullivan opera or a history of nineteenth-century power diplomacy. It all happened four years ago. In the face of adversity, jazz music plays on. Kiev features two jazz venues, Caribbean Club and October Palace, keeping the flame alight.

Singer Anna Mia lives in Kiev and has just released an album, Miasophy (Fancy Music, 2018). She described the difficulties for musicians. "The jazz scene in Kiev is weak: few journalists, few publications, no record labels and we only have a small audience, but we do have some good musicians." Her digital album was released by Fancy Music in Moscow. Mia wanted to make a live recording, but the right equipment was not available, so this is a studio recording. Unfortunately, the microphone was faulty and new vocals were mixed later by Alex Kramer at Na Hati studios. Notwithstanding, the recording quality is good.

Mia is a composer, singer and bassist. She was joined on this recording by two of the first Ukrainian musicians to play modern jazz styles. Trumpeter Yakov Tsvetinsky and pianist Mykhail Lyshenko traveled to Kiev to make the recording. Her favorite bassist in Kiev, Yuri Natsvlishvili joined the quintet and the drummer was Arthur Frolov .

Mia composed and sings most of the tunes in English. Her voice has density. Compelling, almost mesmeric in the low range, her voice is controlled and emphatic in the higher register. "Miasophy" is an amalgamation of Mia and her philosophy, which she described as "People become static, but they can reinvent themselves at any time." When asked about the recording, she replied "The album is about what it means to be yourself. For a long time, I thought there was only one right way to be me. Now, I think that in order to be ourselves, we have to react with the beauty around us every day." It is a thoughtful process, a search for identity.

Asked for a favorite lyric, Mia chose the opening lines of the track "Lost Song" which were written by Natalia Korol: "Those cloudy endless skies/ Through blurry eyes/ Remind me of what I used to be/ When I was running fast/ From my childish past"

Producing music under these conditions is demanding. It emphasizes the ability of the internet as a platform to reach all the corners of the world, and to encourage jazz musicians regardless of their circumstances.