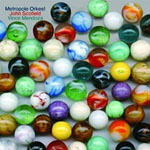 Guitarist John Scofield's shared history with Vince Mendoza dates back to the composer/arranger/conductor's Start Here (World Pacific, 1990) and Instructions Inside (EMI/Manhattan, 1991)—two criminally out of print gems that provided early evidence of Mendoza's distinctive harmonic language, compositional perspicacity and innate ability to get the best out of an ensemble, regardless of the size. Now an in-demand, Grammy Award- winning producer/arranger who has worked with everyone from trumpeter Randy Brecker and the late keyboardist Joe Zawinul to singers Joni Mitchell and Björk, it was really only a matter of time before Mendoza and Scofield would reunite, this time sharing the marquee with Holland's Metropole Orkest.

But 54 goes beyond simply ratcheting up the sonic palette and expanding on material from both artists' past repertoires. With strings, brass, horns, woodwinds and rhythm section, Metropole has proven itself one of the most pliant large ensembles on the planet through past collaborations with Mendoza (since 2005, the Orkest's Chief Conductor and Artistic Director) including his own El Viento: The Garcia Lorca Project (ACT, 2009) and keyboardist Jim Beard's Revolutions (Intuition, 2008), and brings all the color of a full-scale orchestra to the table, but with players who are also equally and intimately familiar with the language and liberation of jazz.

ADVERTISEMENT
Which is a good thing, as a number of Metropole's members are featured alongside primary soloist Scofield on tracks like the groove-laden "Carlos," first heard on the guitarist's soulful Groove Elation (Blue Note, 1005), but here re-imagined with the kind sophisticated harmony and sweeping counterpoint that speak to Mendoza's distinct language—a vernacular that has posited him as heir apparent to the late arranger Gil Evans' mantle. Mendoza's acumen is especially evident on tracks like the funk-driven "Polo Towers," from Scofield's jamband-centric Überjam (Verve, 2002). Originally little more than a sketch of a tune meant to provide a context for extended soloing, here Mendoza's arrangement still leaves plenty of space for the guitarist's gritty, blues-centric approach—as ever, perfectly straddling the line between the "out" and the "in," creating cascading levels of tension-and-release—but turns it into a more full-fledged composition.

In many ways, Mendoza and Metropole have their work cut out; after all, Scofield's albums typically function in a single space, whether it's the soul-jazz of Hand Jive (Blue Note, 1994), from which the swinging "Out of the City" is culled and given a brighter, horn-heavy arrangement by guest arranger Jim McNeely, or the balladic "Honest I Do" and New Orleans Second Line of "Twang," both from Scofield's collaboration with guitarist Bill Frisell, Grace Under Pressure (Blue Note, 1993). Here, however, Metropole has to cover it all, and cover it all they do. Drummer Martjin Vink, bassist Aram Kerdbergen and keyboardist Hans Vroomans make for a versatile and potent rhythm section. Vroomans also has no trouble keeping up with Scofield, delivering a suitably greasy Hammond organ solo over the descending pattern of Scofield's "Peculiar," first heard on Groove Elation (Blue Note, 1995) and here featuring the guitarist wailing with reckless abandon and a visceral envelope filter.

Scofield's material dominates the set, but 54 also puts even more modernistic touches on two Mendoza's tracks from Instructions Inside. Without the programming of the original, and a larger orchestra with which to work, Mendoza turns the already sweeping "Jung Parade" into an even more expansive piece, while "Say We Did" demonstrates the composer's deeper lyricism, and an ability to use an orchestra to its fullest advantage without ever resorting to stereotypical and saccharine devices.

Combining Mendoza's stunning arrangements and some of Scofield's best playing in years, 54 is a milestone in both artists' discographies. Mendoza shows that any material—even the barest of sketches—is grist for his pen, while Scofield demonstrates that, no matter what the context, his voice remains assured and unmistakable. More importantly, both artists transcend individual skill to create an hour- long whole that truly exceeds the sum of its many compelling parts.

Carlos; Jung Parade; Polo Towers; Honest I Do; Twang; Imaginary Time; Peculiar; Say We Did; Out Of The City.