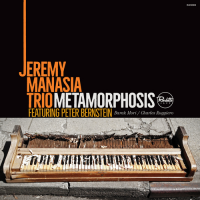 The Jeremy Manasia Trio: new names one and all in this neighborhood save for the gentleman who makes the trio a quartet, guitarist Peter Bernstein. As it turns out, pianist Manasia, a native of Staten Island, has been a mainstay on the New York jazz scene since he returned from Europe in 1997, and Metamorphosis is his sixth recording as leader of his own groups. While bassist Barak Mori and drummer Charles Ruggiero round out the trio, Bernstein appears on every one of the album's half-dozen tracks, so the ensemble really is a quartet masquerading as a trio.

That's a good thing, however, as Bernstein lends color and substance to the group as accompanist or soloist. Speaking of the latter, Manasia is no slouch in that department either, displaying his unassuming tastefulness and agility throughout the session. Even though called on less often, Mori and Ruggiero unsheathe splendid chops as well, rewarding Manasia's confidence in them with a number of well-crafted solos. As for the music, it consists of Bernstein's "Metamorphosis," Dizzy Gillespie's "Wheatleigh Hall," the standard "Nancy with the Laughing Face" and three of Manasia's original compositions ("Witchery," "Over Easy," "Sweet Child"), which together close the album.

"Nancy" is a highlight, thanks largely to a pleasing tempo that never lags, Bernstein's unerring musicality and a dapper solo by Manasia. "Wheatleigh Hall," a bright swinger that should be heard more often, enfolds more of the same, plus unflagging rhythmic support and an emphatic statement by Ruggiero. "Witchery" slows the pace, albeit most agreeably, as does "Sweet Child," which floats smoothly on the wings of Manasia's lyrical introduction. Between them is the Caribbean-tinged "Over Easy," which gives Bernstein another chance to swing, which he does with adeptness and aplomb. Trio or quartet, Metamorphosis is admirable and easy on the ears, even though marred to some degree by its modest forty-five minute running time.