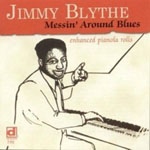 The more time passes the sharper the light it shines on this music. Audio restoration has enhanced the quality of these pianola rolls made by a musician who was in right at the very beginnings of jazz. He was recording in Chicago before the end of 1927 in the company of clarinetist Johnny Dodds and others, and his feel for and innate understanding of the music is abundantly obvious here.

An ethical debate could rage over the enhancement of the music but the fact remains that it's never been heard with such sonic clarity and the processing involved has done nothing to sanitize it. Indeed something like "That's My Business" is the sound of music encompassing not only what has gone before with its ragtime syncopation but also what was to come, albeit in a manner entirely Blythe's own, with the left hand intimating boogie-woogie in a way that few of his contemporaries did.

"Function Blues" hints at the kind of thing Leroy Carr expanded on in the '30s, with its down home feel, tempered somewhat by big city sophistication. The woozy syncopation is however entirely Blythe's own. It offers one of the numerous hints here that he was essentially a talent out of time; hindsight is a dubious benefit at the best of times, but in this instance the fact of Blythe's death in 1931 lends substance to the contention.

"I Won't Give You None" is the same kind of thing, with Blythe more than hinting at a kind of elegance that might have gone down well only in establishments where the down home feel wasn't welcome. That said the piece still unsurprisingly exudes the kind of joy of life that could arguably only have sprung from a more innocent, less wracked time.

"Steppin' On The Gas" as a title is somewhat misleading, not least because Blythe doesn't up the tempo accordingly. Instead that feeling prevails of music on the cusp of something else at the same time as it pays homage to the immediate past.

But overall that joy of life prevails not only because of the literal circumstances in which this music has been captured for posterity, but also because any present day reconstruction of it would be a hostage to polite reverence. Happily there's none of that here.

Farm House Blues; Black Gal make It Thunder; Mama's Got 'Em; The Folks Downstairs; That's My Business; Steppin' On The Gas; Functikon Blues; When Grandpa Steps Out; Forty Blues; Sugar Dew Blues: Carolina Stomp; Messin' Around; My Baby; Nicaragua Blues; A Good Man Is Hard To Find; Ain't Gonna Run You Down; Comin' Home Blues; I Won't Give You None; Underworld Blues.