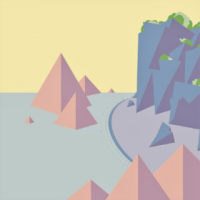 The collective name under which Brad Henkel and Yoshiko Klein operate suggests that the duo's debut release is a record filled with jolly songs about inconsequential things (or that it's a tribute to the Grand Slam winning French tennis professional, Mary Pierce). Whether such intentions are deliberate or not, it takes only a few seconds of "Glad We Did" to make it clear that jollity is thin on the ground, even if some sections of these two lengthy compositions might raise a wry smile. What there is in abundance is invention, imagination and atmosphere.

"Glad We Did" shifts between industrial noise, unsettling and often indecipherable spoken word (Henkel's voice is electronically altered), ambient passages, spooky-yet-plaintive electronic wails and even a cheery section that's reminiscent of the children's TV show, The Clangers—an unlikely influence on Merry Peers, but still loved by reviewers of a certain age.

"You Say Me" is structured in a similar way to the first track. Opening with a droning, church organ-like sound, it overlays with frenetic bird calls before moving, via a few seconds of quiet monophony, into a far more intense section—a wall of sound that lifts in volume and strength before gradually resolving. Once again, there are a few calm seconds before the sound rebuilds in volume and intensity. "You Say Me" ends with the sound of the wind, then all is quiet.

There are times on Merry Peers when the music creates a sense of reverie, others when it sits quietly in the background and yet others when it leaps to the forefront and demands full attention. Its unpredictable and surprising nature ensures that it rarely allows the attention to wander. In a nod to music's commercial past Merry Peers is available on cassette as well as download.

Glad We Did; You Say Me.