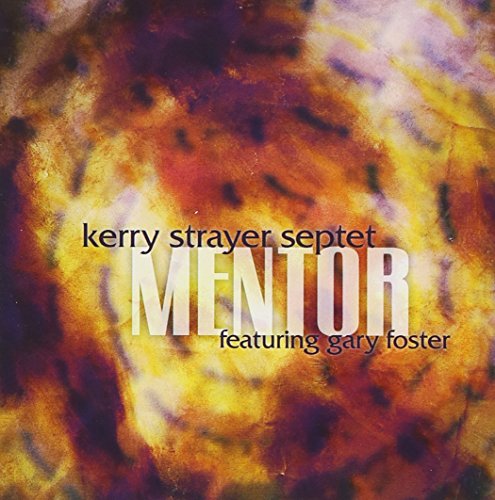 It takes years to learn to play jazz as well as Kerry Strayer does, and one always needs a mentor —perhaps several—to help him (or her) reach such a lofty plateau. Gary Foster, among the West Coast’s best and busiest reed masters, is one of Kansas City-based composer/arranger/saxophonist Strayer’s most influential teachers, and it is Foster to whom Kerry has dedicated his third album as leader, one on which the honoree plays a pivotal role.

Not only does Foster star on alto and tenor saxophones, flute and clarinet, he also wrote three of the album’s most delightful tunes, “Saturday 10 AM,” “Sweet Lips” and “Warne-ing” (the last for one of Foster’s mentors, the late great tenor saxophonist Warne Marsh). The arrangements are by Strayer, who knows how to make a septet sound kaleidoscopic and irresistible. Besides his usual baritone sax, Strayer plays lustrous soprano on Jimmy Rowles’ “The Peacocks“ and in a number of ensemble passages. He and Foster are bolstered on the front line by a pair of seasoned pros, trumpeter Barry Springer and trombonist Earlie Braggs, and backed by a blue-chip rhythm section comprised of bassist Bob Bowman, drummer Todd Strait and (it pains me to write this) the late Frank Mantooth on piano. Gary Helm adds percussion on two rhythmic treasures, Clare Fischer’s “Gaviota” and David Torres’ “Siempre Me Va Bien.”

Foster, one of whose trademarks is versatility, is showcased on alto (“10 AM,” “Siempre Me Va Bien,” Alan Broadbent’s “Don’t Ask Why,” Charlie Parker’s “Yardbird Suite,” Ray Noble’s “I Hadn’t Anyone Till You”), tenor (“Warne-ing”), clarinet (“Sweet Lips,” Dave Brubeck’s “In Your Own Sweet Way”) and flute (“Gaviota,” Billy Strayhorn’s “A Flower Is a Lovesome Thing”). Foster is a brilliant soloist—his gossamer alto prompts memories of Paul Desmond—but so is everyone else in Strayer’s superb ensemble. Mantooth is especially prismatic, whether comping or soloing, reminding us of what a great loss the jazz world suffered when he succumbed to a heart attack in January at age fifty-six. Braggs crafts a number of impressive solos, especially on “Yardbird Suite,” as do Springer, Bowman and Strait. As for Strayer, he’s technically precise, sonically pleasing and always persuasive.

This is the kind of pleasurable music one should expect when seven earnest and talented musicians join forces, and Mentor never once lets its audience down. More than an hour of high-caliber straight-ahead jazz that is easily recommended.

Saturday 10 AM; Gaviota; A Flower is a Lovesome Thing; Sweet Lips; Siempre Me Va Bien; Don