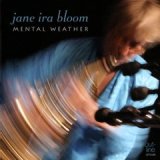 Sometimes it's good to shake things up. Jane Ira Bloom has been working with the same bass/drum team of Mark Dresser and Bobby Previte since The Red Quartets (Arabesque, 1999) and, more often than not, the soprano saxophonist's pianist of choice has been Fred Hersch as far back as Mighty Lights (Enja, 1983). Bloom's distinctive blend of spare lyricism, sometimes knotty writing and tasteful use of live electronics remains intact but, with an entirely new quartet, Mental Weather is less ethereal and more direct than the equally fine Live Silver, Like Song (ArtistShare, 2005).

Bloom—one of a only handful of saxophonists for whom the soprano is her sole axe—has found a greater sense of immediacy with this new group. Never one to overstate her message, on the elegant rubato opener, "A More Beautiful Question," Bloom has polished every possible rough edge, leaving fragile yet unmistakably strong melodic gems. Pianist Dawn Clement may be a relative newcomer to the scene, but she's as attentive and split-second responsive as they come, keeping her accompaniment lean yet rich, while following Bloom's almost painfully beautiful voice as if the two were joined at the hip. Bassist Mark Helias is another perfect recruit, capable of great clarity and consistently perfect choices, while the increasingly ubiquitous Matt Wilson continues to prove a malleable drummer for whom no context is beyond reach.

Even the propulsive "Multiple Choice," with its idiosyncratic and barely outré theme, utilizes space as a fundamental component. Wilson is remarkably inventive, seamlessly changing feel and emphasis from fiery double time to backbeat-driven swing during Bloom's most virtuosic solos of the disc. Clement covers considerable territory despite the relatively brief duration of her solo, moving in perfect synchronicity with Helias and Wilson's ever-shifting foundation, while Helias' robust-toned solo migrates from thematically rhythmic pizzicato to a delicate arco that cues Bloom and Clement to finish the tune on an unexpected note.

The title track is knottier still, moving into an up-tempo, irregularly metered groove where Bloom's evolving use of live electronics is at its most vivid, with vertical harmonies swooping in unexpectedly to expand her instrument's soundscape, sometimes in the blink of an eye. Clement may not work with effects (other than occasional use of electric piano), but her jagged, angular solo remains a serendipitous follow-up to Bloom's own adventurous nature.

Ending the album alone on a medley that brings her own "First Thoughts" together with Rodgers and Hammerstein's "This Nearly Was Mine"—Mental Weather's only non-original—Bloom demonstrates that when a melody is this good, it's not necessary to stray far from it. Instead, subtlety and nuance speak with greater power, as Bloom's allegiance to the music demonstrates inimitable style through a nothing-to-prove mindset.

Cleverly skirting the edges of the avant without losing sight of the importance of melody, Mental Weather is a compelling evolutionary set for Bloom, whose career continues to be marked by gradual but inexorable growth.