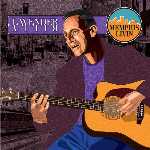 Memphis, Tennessee is a city where significant parts of American history were written. It's where Martin Luther King was assassinated in 1963, and Elvis Presley's Graceland attracts thousands of visitors each year. In a cultural sense, Memphis has inspired and launched the careers of many artists from different colors and creeds in the wide spectrum of the arts, ranging from literature to movie making and, of course, music. As such, to walk the streets of Memphis and the famous historically recognized Beale Street is on every tourist's agenda. Beale Street is where jazz and blues were lived, suffered, nourished and blended into a style now known as Memphis Blues.

For guitarist Billy Lavender, "blues" might have been the first word he spoke as a toddler. He's been roaming the Memphis music scene for many years now, having accompanied peers and pupils and numerous disciples of the blues. As a left-handed player, he learned to play upside down on a right-handed guitar, leaving the strings as they were. His unique skills shine on Memphis Livin', surrounded by some of Memphis' best musicians, like Blind Mississippi Morris—rated as one of the world's ten best harmonica players.

"Singin' The Blues" offers a flying start, with drummer Tony Adams on vocals and Lavender on lead guitar. The track is followed by "Let's Party," featuring Reba Russell on vocals, who seduces those listening to come to Beale Street, supported by Blind Mississippi Morris as a persuasive but gentle enforcer to do just that. On "Tonight," it's Ken Dinkins on vocals in a sweet soul 'n blues tune which proves the variety and versatility of the blues as a genre. The musicians flirt with a little funk in the instrumental "Just Chillin'" before returning to base in "Cold As Ice"—a straightforward blues ballad featuring yet another vocalist, Vince Johnson, who also excels at the harmonica. Lavender then steps in the spotlight as a singer in "Get Along," a rock 'n roll gem where keyboardist Russell Wheeler plays piano rather than the Hammond B3 organ he handles craftily on many of the other songs. "Blue" is definitely one of the highlights, with Brad Webb on sitar and soulful vocals by Russell.

For the real blues adept there isn't a weak track to be found, and the songs follow each other fluidly, as they would during a live performance. Lavender's presence throughout the album, as a gifted soloist, equals the part he allows his fellow musicians to play in this fine collection of fourteen songs that showcase the splendor of the Memphis blues and its current ambassadors.

Singin The Blues; Let's Party; Tonight; Just Chillin; Cold As Ice; Get Along; Blue; Shake it; Bottom Line; Bad Boy; 3AM; All The People; If I Could; Delta Time.