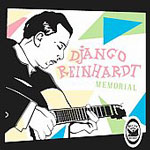 When Django Reinhardt switched from acoustic to electric guitar, his fans, feeling betrayed, called him "Judas." However, he later used this new instrument to record Blonde On Blonde, often considered one of the greatest rock records of all time.

Actually, that was Bob Dylan. But Reinhardt's electric period, which encompassed the last few years of his life, is certainly the black sheep of his catalog. Reinhardt was still in fine form and had even incorporated elements of bebop into his playing style. But many hold on to the earlier recordings of the Hot Club, with his sharp, rhythmic guitar alongside Stephane Grappelli, neither of which are present here. It's safe to say that of all the Djangophiles out there, not many have taken their cue from the late-forties Django to hone their attack.

However, this collection of recordings from 1947 is quite a treat. Like most Django Reinhardt material, this double-CD collection probably has some stuff that you already have, mixed in with some stuff that you don't. Whatever the case, most of this material is hard to come by; about half was available on the Peche a La Mouche collection (along with some other stuff that doesn't appear here). Whatever the reason, these recordings don't appear too often in circulation, and fans of Reinhardt will no doubt add a missing piece to their collection with this set.

But the music is the main draw, and Reinhardt doesn't disappoint. While still working with a sound that's similar to the recordings from the thirties, Reinhardt has added drums, taken away a guitar, and stuck with the clarinet as the other lead instrument. None of the other players are anything special, but Django's playing still crackles with exciting arpeggios and interesting rhythmic phrases, even if the sound of the electric is a bit jarring. Most of the selections are originals, many of them old chestnuts like "Swing 39, "Nuages, and "Stockholm, rendered with the same vim and vigor as the old days. Also of interest are a few tracks with Rex Stewart on cornet.

Django Reinhardt would die a few years later, still hailed as a guitar hero yet known primarily for the music of his past. For listeners who may be unfamiliar with his last recordings, this generously sized collection is definitely worth checking out.