Steve Cardenas: Melody in a Dream 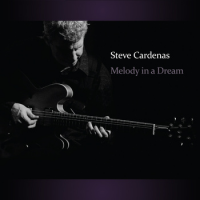 Melody in a Dream is a humble tribute to Steve Cardenas' mentors and music heroes. The Kansas City guitarist who moved to New York City in 1995 pays his respects to figures like late piano genius Thelonius Monk, avant-garde drummer Joey Baron(who is his sideman in this album), the deceased drummer Paul Motian and pianist Horace Silver.

This is the fourth Cardenas solo album, who was a member of Paul Motian Electric Bebop Band for several years, as well as a fundamental piece of Killer Joey, Joey Baron's group.

"Ode to Joey" is a theme composed by Cardenas and dedicated to Joey Baron, the renowned Virginia drummer who has played and recorded with jazz cornerstones like Stan Getz, Dizzy Gillespie, Joe Lovano and John Scofield.

The sound of the melody is overall sophisticated and is one of the three pieces of the album enlightened by Shane Endsley's trumpet.

Lee Konitz, one of Chicago's most celebrated saxophonists from the cool jazz era, is remembered by Cardenas band in the melody "Subconscious-Lee." It is an interesting and modern version of that 1950's piece included in the Konitz album with the same title.

Cardenas and Shane Endsley play the same notes on their instruments in certain key moments and pay a deserved homage to that melody whose original version is not recorded with guitar nor trumpet, but with piano and sax. "Broken Time," originally composed by Joey Baron is one of the catchiest themes of the album. It is a real challenge not to move one's feet to follow the rhythm. It's a perfect tune to listen with a glass of wine while you read and warm up next to a cozy fireplace.

Cardenas, who's currently a member of the Charlie Haden Liberation Music Orchestra and Steve Swallow Quintet revisits Horace Silver's "Peace" and his band sounds confident, relaxed and seems to be truly enjoying to play the track included in the 1959, classic Blue Note album Blowin' the Blues Away. The band leader resolves stoically with his guitar the lack of a piano and it is easy to imagine him closing his eyes to play and improvise while respecting the main melodic structure of "Peace."

The New York City's New School For Jazz and Contemporary Music professor and his band approached respectfully to "Teo" a 1964 classic composed by the departed piano master Thelonius Monk. It may be one of the most cheerful tunes of the album.

Cardenas demonstrates why he and Don Sickler, were the right men to do research and write Thelonius Monk Fake Book, a compilation of 70 lead sheets of Monk's hits, as well as some of his hardly known and unrecorded themes, counter lines, ensemble parts, bass lines and a biography of North Carolina's jazz prodigal son.

Just One More Thing; New Moon; Ode To Joey; Once Around The Park; Broken Time; Street Of Dreams; Subconscious-Lee; Peace; Teo; In The Year Of The Dragon