By Woodrow Wilkins
February 9, 2009
Sign in to view read count 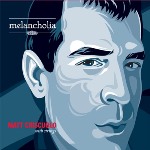 Take a quartet, add some strings, and you'll get an elegant seasoning to flavor jazz. Alto saxophonist Matt Criscuolo accomplishes this with Melancholia, his third album as a leader.

Criscuolo has a knack for embracing the hard bop style, yet adding some contemporary improvisation. His credits include work with David Murray, and Etta James, and he counts among his influences Murray, Charlie Parker and Ornette Coleman. For Melancholia, named for a Billy Eckstine composition covered here, Criscuolo is accompanied by pianist Larry Willis, bassist Phil Bowler and drummer Billy Drummond. A small string ensemble joins the foursome on several selections.

"Pensivity" is one of two Criscuolo originals. The rhythm section is subtle but effective during the opening melody. The sax is smooth and clear. Criscuolo puts it through its lower range at times, but consistently keeps the sound flowing. Willis scores on an extended solo, punctuated by the bass and a mix of cymbals and rim shots. The sax expresses freely during the closing sequence, wailing at times.

Willis composed "Ethiopia." The piano opens in a brooding tone, soon joined by the strings and the rest of the ensemble. Sax and strings blend, giving the song a symphonic edge. The strings take a break during Criscuolo's solo, but come back, adding more color to Willis' passage.

"Chan's Song" is one of two Herbie Hancock pieces in this session. Criscuolo delivers some of his most beautiful playing here. Drummond shines behind Willis' solo and again during the melody, stressing certain points by changing the pace on the cymbals. This is followed by a groove-oriented take on Hancock's "Tell Me a Bedtime Story." The upbeat mood is a departure from the typical slow arrangements.

Wayne Shorter's "Infant Eyes" and "Miyako" are also covered. However, the combination of fresh arrangements and Criscuolo's playing sets this album apart from others that feature more covers than originals.