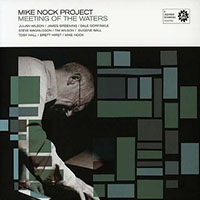 Think globally, act locally could well be Mike Nock's musical philosophy. Returning to Australia in the mid-1980s after spending a quarter century in the USA where, amongst his many accomplishments, he led seminal fusion group The Fourth Way and recorded a series of fine discs as a leader, including In, Out and Around (Timeless, 1978) with Michael Brecker, the New Zealand-born pianist has released a string of equally significant and undeniably world class albums, largely featuring fellow musicians from Down Under.

While the nonet of Meeting of the Waters is only one person shy of the tentet on his Bigsmallaband's Live (ABC Jazz, 2003), it's a less brass-heavy ensemble that fills in yet another part of Nock's expansive musical canvas. He's worked with bassist Brett Hirst and drummer Toby Hall for a number of years, making for a core rhythm section on Meeting of the Waters that's flexible and responsive, where dynamics are executed with such simpatico that it's hard to know where writing ends and interpretation begins.

Four horns, vibraphone and guitar flesh out this program of six Nock originals and one each by Mike Majkowski and Jackson Harrison—two emerging Australian talents who don't play on the album, but are strongly felt nevertheless. Majkowski's brooding "Mysteries, propelled by a subtle but persistent three-note pulse, and the understated ebullience of Jackson's "Atavism are linked by their 7/4 meter. Still, both groove in completely different ways, with the latter's slightly staggered swing providing a challenging foundation for strong solos from vibraphonist Dale Gorfinkle and tenor saxophonist Julian Wilson.

Nock's writing is a compelling blend where cerebralism doesn't overshadow emotional resonance, and harmonic/melodic sophistication doesn't supplant lyricism. Subtlety is the key; even the sharp horn punctuations of "The Six Virtues make their point without the use of a big stick. The tune's underlying metric complexity creates an elegant underpinning for altoist Tim Wilson's solo, with guitarist Steve Magnusson's mix of Bill Frisell's skewed sustain and John Scofield's sharper tone first meshing with Nock in accompaniment, then coming to the forefront for a solo that's as much about texture and vibe as it is thematic construction.

Eschewing simplicity of format, Nock writes detailed pieces with plenty of solo space and interpretive freedom, but have an almost classical shape in their allegiance to longer form and gradual revelation. Still, tradition remains fundamental on the gently swinging "Jazz Elective #2, with trombonist James Greening's visceral solo, and the strangely ethereal yet grounded "Patience, featuring a less-is-more solo from trumpeter Eugene Ball and one of but a few solo spots for Nock himself.

While Duologue (Birdland, 2007), his duet with saxophonist David Liebman, provides ample proof of Nock's refined virtuosity, Meeting of the Waters is more about Nock the writer, Nock the bandleader. Reflecting an artist with nothing to prove but much to say, Meeting of the Waters is another high watermark for Nock; received too late to make a 2007 best of list, it could be an early contender for 2008.