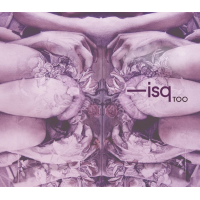 'Zion' is the single from the new album by -isq 'TOO' (released 16th March 2015) Described as “like EST with vocals (& in an entirely good way)” by John L Walters, -isq continue to show the strength and variety of their songwriting with this album which embraces their wide ranging musical influences. -isq are Irene Serra: vocals; Richard Sadler: double bass; Chris Nickolls: drums; John Crawford: piano. “Two aspects of -isq give the band a special edge: Serra’s world-weary but captivating vocals; and the interplay between singer and bassist.” – Bruce Lindsay 'All About Jazz'

track of the day Zion 'TOO' Cheesepeas Records ISQ