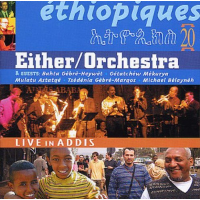 The 20th in the critically acclaimed Ethiopiques series, Live in Addis takes Ethiopiques - and Ethio-jazz - to a new place. The Either/Orchestra, a 10-piece jazz orchestra based in Boston, are among the first non-Ethiopian artists to become serious interpreters of Ethiopian music over the last eight years. Recorded live at a historic concert, it was the first performance by a U.S. big band in Ethiopia since Duke Ellington in 1973.

The results blend state-of-the-art playing and an exotic, captivating Ethiopian program into a kind of Buena Vista Social Club Addis-style, featuring several Ethiopian elder statesmen performing with a big band for the first time since the 1960s, and two younger singers doing so for the first time. Inspired by the great Ethiopian pop and jazz of the '60s and '70s, the E/O has brought the full array of modern jazz and Afro-Cuban innovations to an Ethiopian repertoire.