What'll I Do by Luke Carlsen 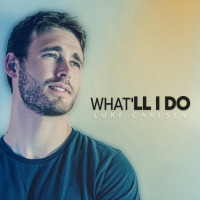 Album Title: What'll I Do
Label: Self Produced
Released: 2020