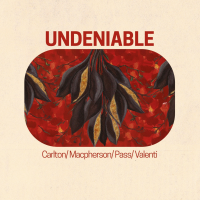 The rubato introduction of Undeniable was inspired by Alana Macpherson’s return to Boorloo/Perth and her enthusiasm to collaborate on this quartet project. The second part of the composition was inspired by Polly-Pearl, a friend and musical collaborator of Talya, who was introducing her to broken beat and drum and bass. This inspired the fusion of the rubato jazz intro with the drum and bass rhythmic backing and frantic melodies showcasing the chordless quartet instrumentation. The title Undeniable was taken from a conversation in a mentoring session with revered composer, musician, and producer Miguel Atwood-Ferguson, who mused that writing, performing and practising music has the tenacity to be Undeniable — something unaffected by the perception of others; something intangible; a process to be conceived of and enjoyed by the artist.