The Icemaker's Mistress by The University of Toronto 12TET 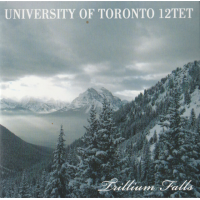 The University of Toronto 12tet is a contemporary ensemble comprised of students in the Bachelor’s, Master’s, and Doctorate programs. Since its creation in 2012, the ensemble has established itself as a vehicle for elite players and composers in the jazz performance program and beyond. The band has been featured many times at the Rex Hotel and U of T’s Walter Hall with guests who rank among Canada’s most prominent jazz musicians. Guest soloists include Ralph Alessi, Will Kennedy, Jim Lewis and Chase Sanborn. Smaller than a traditional big band, the 12-piece format allows more freedom for soloists while still offering a wide range of ensemble textures. The 12tet sound pays tribute to classic bands, taking cues from Art Pepper Plus 11 and The Rob McConnell Tentet, but also steps further by embracing more contemporary rhythmic and harmonic inspirations.

The University of Toronto 12TET

About The University of Toronto 12TET