Part I by Trouble Kaze 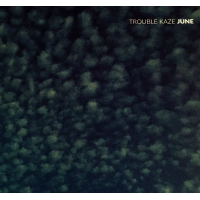 "Part I" is the first track from Trouble Kaze's album, "June." . The band features an expanded version of the group Kaze which has released three previous recordings. Trouble Kaze features pianists Satoko Fujii and Sophie Agnel, drummers Peter Orins and Didier Lasserre, and trumpeters Natsuki Tamura and Christian Pruvost. The album was recorded during the band's third performance at La Malterie in Lille, France.

track of the day Part I June Circum-Disc Trouble Kaze