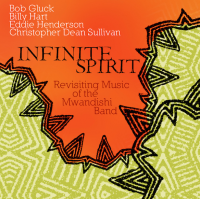 What's that funky smell? It's International Jazz Day. JAM forever baby. Beat this for a drum intro and get lost in the trumpet and keys solos....no faking. Still got it. #totallynotbitchassness

Featuring pianist/arranger Bob Gluck, two longtime musical associates and jazz masters, drummer Billy Hart and trumpeter Eddie Henderson, and bassist Christopher Dean Sullivan. This novel performance of Herbie Hancock's "Sleeping Giant" begins with a gradually unfolding Billy Hart drum solo. Hart's ideas unfold within a dazzling array of electronic sounds--as elsewhere on this recording, composed by Bob Gluck-to which this consummate creative drummer--alternately responds and holds his ground. The solo ushers in a multi-movement suite that takes us through a sprawling piano solo in which Gluck scoops up and gracefully reconfigures Hancock's motifs, building to a fever pitch. Trumpeter Eddie Henderson's beautiful sound highlights an elegiac melodic section which opens into a gloriously confident trumpet solo, Henderson's trademark sun-dappled tone much in evidence. "Sleeping Giant" is the opening track from a celebration of the repertoire and exploratory musical spirit of the ensemble that first brought Hart and Henderson into the public eye, Herbie Hancock's seminal sextet, known as the Mwandishi band. For Hart, it was in that band that "I found myself… we could communicate on the same level with the same vocabulary." [? 2016 Robert Gluck & the Research Foundation of the State University of New York; Hancock Music Company (administered By Kobalt Music, MCPS)]