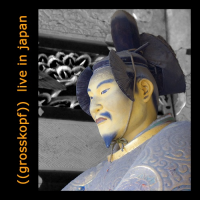 OK, when it comes to drum and bass I'm usually stuck in the Goldie/Photek section, but this isn't three bad.

Original recorded live in Osaka / Japan in 2009, taken from the CD "Live in Japan" released by (type:g)records The track consists of different short melodic phrases spiced with lots of improvisation, backed by a deep break beat, drum'n bass-style groove. The CD was recorded on the tour through Japan in 2009 at the "kids bar" in Osaka.