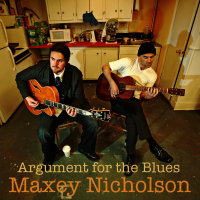 Album Title: Argument for the Blues
Label: Self Produced
Released: 0

Maxey presents yet another facet of his music via his personal voice on guitar. Whereas past ensembles have had a rotating cast of personnel and compositions, they typically were full of texture and buoyancy. Here, it's a stripped down, salt of the earth music, as much blues and it is jazz, and it's no less compelling.

It's easy to make an argument for the blues. And, actually, I don't think it needs an argument. For me it is an expressive and joyous cry that can describe the human condition with it's peaks and valleys. I find the blues at the root of jazz, and hope that whatever I play, it can be called blues. Or jazz. Personnel: Josh Maxey, electric guitar and David Nicholson, acoustic guitar. Argument for the Blues is album number 4 in a series of 6 records in 12 months.