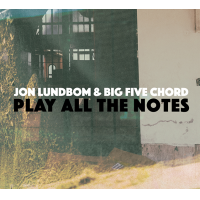 You will be forgiven for thinking its the PMS kind these guys are riffing to. Make it stop, "Period." #painful

"Period" is a track off of guitarist Jon Lundbom & Big Five Chord's latest EP, "Play All The Notes." "Period," which places Lundbom and his band squarely in Tim Berne territory. More modular than other Lundbom compositions featured throughout the EPs, “Period” brings an unusually angular and (fairly) straight-eighth feel. Exclamation point takes the first solo on tenor, slowly and lyrically developing the song’s melodic themes over Elliott and Monaghan’s complicated stutter-step. Lundbom follows, his plaintive, searching solo shifting the band into another vibe entirely. Featuring Jon Lundbom: guitar; Jon Irabagon: alto sax; Balto Exclamation point (tenor, prepared tenor, and balto! sax), Moppa Elliott: bass; and Dan Monaghan: drums. "Play All The Notes" is the third of four digital EPs the group is releasing over the course of 2016. At the end of 2016, the nearly two hours of music will be collected in a limited-edition four-CD 2016:EPs boxed set. All four of the EPs and the four-CD boxed set are available exclusively through www.JonLundbom.com www.jonlundbom.com www.facebook.com/BigFiveChord www.twitter.com/BigFiveChord