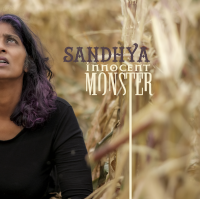 SANDHYA A MULTI-DISCIPLINE CREATIVE FORCE in Baltimore–Washington since the late '90s, Sandy Asirvatham, now known as Sandhya (SAHN-dia), is poised to break nationally with her newest project, INNOCENT MONSTER. This art rock album contains ten original songs featuring vivid lyrics over deep-pocket grooves, all tied together by Sandhya’s charismatic voice and bold choices at the piano. It embodies a throwback, '70s-'80s-'90s FM radio sensibility that perfectly suits what Rolling Stone calls our new “post-genre” era. Fierce but philosophical, cynical but play- ful, these songs mirror the original Sanskrit meaning of Sandhya: the murky junction of Darkness and Light. Sandhya’s earliest successes came as an award-winning columnist for Baltimore CityPaper, later as an Emmy-winning PSA producer/writer. She got serious about music when trying to escape personal crises through obsessive piano practice. (It worked.) Her first album, MEMOIR (2007), contained jazz-pop originals and a few standards. She was the visionary behind MOBTOWN MOON (2013), a massive Pink Floyd homage for which she gathered 40+ collaborators from the mid-Atlantic’s vibrant, varied music scenes. In 2018 she began working with producer Pete Strobl, best known for stints as Gary Puckett’s musical director and bass/voice mentor to Wolfgang van Halen, Eddie’s son. The team completed all band tracks for INNOCENT MONSTER by early 2020. When global pandemic stalled the proj- ect, Sandhya taught herself how to cut pro-level vocal tracks at home, and ended up with an even better final product than expected.