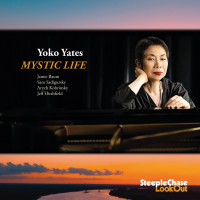 The leader of this captivating debut album,"Mystic Life" Yoko Yates is the celebrated composer of the soundtrack for the award-winning documentary film Mothers’ Way, Daughters’ Choice filmed in NYC. Yoko Yates pianist/composer/educator grew up in Hokkaido, Japan, the northernmost island where the vast ancient and ingenious nature is still intact. Yates’ compositional style and ideas are hugely influenced and inspired by her formative years surrounded by this unique environment. In her childhood, Yates' interest in the natural world was also generated from science-based documentaries, and travel and nature programs on television. The frolicking plant life in various Disney films led her to envision the voluptuous colors and climbing-vine melody of Jungle Flowers.