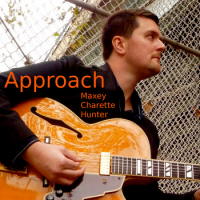 Maxey is on a torrid pace to release six albums in a year time. It's an admirable goal, but, ultimately, it's the quality of the music he's releasing that has earned him respect. This is the second of that six. More bluesy than first album Incarnate and more grooves than third album Language of Sound and Spirit. Great stuff. Organ man Charette will be featured as the AAJ dotd for his own album on 4/30/12. Check it out.

Approach is album number 2 in a series of 6 records in 12 months. Intent is defined as something that is intended, an aim or purpose, meaning, or the state of mind when one carries out an action. For me the value of music is its ability to reach a listener in a transformative manner. I've found music to have a flow of meaning, love and purpose that I've sought over the years to access and participate in. My intent is to be consciously involved in that flow. Personnel: Josh Maxey (guitar), Brian Charette (organ), and McClenty Hunter (drums).

track of the day Intent Approach Self Produced Josh Maxey