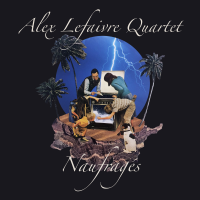 Alex Lefaivre is a bassist, composer and educator based in Montreal. He is a founding member of Parc X Trio, winners of the 2010 TD Grand Prix de Jazz at the Festival International de Jazz de Montréal. He is also a widely celebrated sideman, having shared the stage and recorded with a wealth of Montreal artists including Michelle Sweeney, Joel Miller, Aliocha, Klo Pelgag, Sonia Johnson, and Kalmunity. Lefaivre’s new album Naufragés (“Castaways”) is the follow up to YUL, his critically acclaimed 2018 quartet recording. Here, Lefaivre presents a new collection of five original compositions and three covers that reflect his contemporary aesthetic and visceral sound. After many failed attempts at scheduling the recording during to the COVID 19 pandemic, the group finally managed to assemble at Montreal’s Studio Madame Wood on April 5th 2021. Recorded over the course of two spontaneous sets of music, the listener can feel the urgency and sheer joy erupting out of Alex and his bandmates. The session was recorded and mixed by Simon l’Espérance and was mastered by Lefaivre himself. Naufragés’ eclectic and cinematic contemporary jazz style features echoes of punk, disco, Film Noir and even reggae, giving the music a biting energy that oscillates freely between raw, rough textures and moments of refined grace, all the while leaving lots of room for these brilliant musicians to stretch out. Naufragés will be released worldwide on Friday, August 27th 2021 on Arté Boréal.