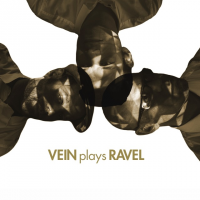 Ravel and jazz....what's not to love?

Since their first release in 2006, Swiss trio VEIN have cemented a reputation as an exciting, hugely talented trio who play with passion, drive , finesse and as masters of musical interplay. We have seen twins, drummer, Florian Arbenz and pianist Michael Arbenz with bassist Thomas Lähns release twelve albums and perform over 450 shows in over 30 countries in a number of settings – as a consummate trio and with special edition quartets featuring great American saxophonists Greg Osby and Dave Liebman. Earlier this year, VEIN returned to their roots and released The Chamber Music Effect, a collection of self-penned compositions that explored ideas around their major influence; classical music. Continuing along that vein, they return resolutely pursuing the same path, with their 13th recording on a new label – the Dutch Challenge Records – to present VEIN plays RAVEL , a collection of compositions by 20th Century French composer, pianist and conductor, Maurice Ravel. VEIN plays RAVEL sees the trio carefully select eight pieces by Ravel that encompass his various stylistic modes. Using them as a template and translating them into a VEIN-esque musical language, VEIN repeats Ravel's approach some 100 years later. VEIN play RAVEL will be released worldwide on Challenge Records label on Friday, September 8th, 2017.