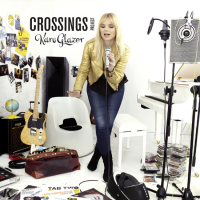 Mike Stern - always a pleasure to hear him play, and such a happy tune. Another vocal find in Karo Glaser to uplift and elate and a cheeky sax solo from Andrzej Olejniczak.

"Flying Circle" a new single of Karo Glazer promoting her new CD "CROSSINGS PROJECT" with fantastic solos of Mike Stern and Andrzej Olejniczak. On the piano you can also find the great John Taylor. All composed and arranged by Karo Glazer.

CROSSINGS PROJECT is an international musical project created by KARO GLAZER, composer, arranger vocalist and producer, who invited to collaboration many of her friends from various parts of the world. Among her outstanding guests were: MIKE STERN, who used to play with Miles Davis, one of the top three most unique and recognizable guitar players in the world; LARS DANIELSSON, the star of ACT record company, whose double bass and cello playing has gained worldwide esteem; JOHN TAYLOR, legend of ECM, a piano player who is one of the most sophisticated musicians in the history of jazz; KLAUS DOLDINGER, founding member of Passport, a famous jazz-rock group, composer of film scores for e.g. “Neverending Story” or “The Boat”; JOO KRAUS, known to the younger generation as a founder of hit group Tab Two; and lastly Thomas Sanchez, a Mexican percussionist. Polish names are also among those outstanding stars invited by Karo to the project: Marek Napiórkowski, Krzysztof Ścierański or Andrzej Olejniczek. Moreover, it is important to name the input of a fantastic string quartet from Philharmonics in Munich. To sum up, the crème de la crème of contemporary jazz, the lineup of dreams that created a set tones and colors so original that managed to draw the attention of American and European jazz critics. The final sound is the outcome of cooperation between Karo Glazer and MARTIN WALTERS, American music producer, multi-award with the Grammy Award who worked with e.g. Terri Lynne Carrington and her “Mosaic Project”, Esperanza Spalding and Spyro Gyra.

All that makes CROSSINGS PROJECT a special event with a global reach. The extraordinary nature of this project results also from the fact that the guests invited by Karo Glazer never had a chance before to cooperate in such set of artists. The connection of Mike Stern’s expression with the Scandinavian minimalism of Lars Danielsson and the sophisticated phrase of John Taylor supported by the elaborated rhythmical layer created by Thomas Sanchez is just mind blowing. Due to the attention-drawing compositions and arrangements that Karo Glazer has written specially for the CROSSINGS PROJECT it was possible to combine the talents of musicians with such different passions, sensitivity or temperaments into one incredible story. This is how the idea of CROSSINGS was brought to light and became an inspiration for further projects in similar company, also in concerts.