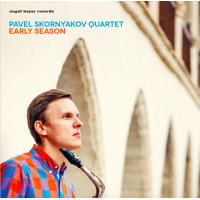 Great facility, immense exuberance, and a perfect start to a joyous live gig.

Early Season is the title song of the debut album by Pavel Skornyakov which features his original compositions. Skornyakov composed this music during the last 10 years and played it live with many collectives that he performed with. He says, "When I wrote these tunes, I never thought that one day I would record them on an album, doing it out of a pure need to compose music. But through the will of God, it happened!” The compositions appealed to his friend, a German bass player Martin Zenker who suggested they record the music. In summer 2017, Martin and the piano player Paul Kirby from Scotland were performing at a jazz festival in Russia, and the musicians decided to give this idea a try. Accompanied by the Moscow drummer Alexander Zinger, they met at the Cinelab Studio in Moscow and recorded the album within two days. Luckily, the international band turned out to produce exactly the right sound for turning Skornyakov’s ideas into reality. Early Season was released in June 2018 on the German jazz label, nagel heyer records. It is now available on all major digital venues, and as a hard copy.