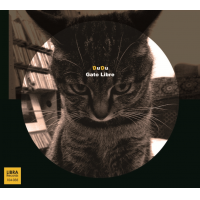 A free cat named Dudu strolled into a saloon and placed his paws on the counter..."Gimme 2 shots of kitekat dude dude" (cat had a stutter). Perfect score for a new spaghetti western.

"Dudu" is the title track that opens Natsuki Tamura's new Gato Libre CD. It is the fifth release by the trumpeter's working quartet since 2005.