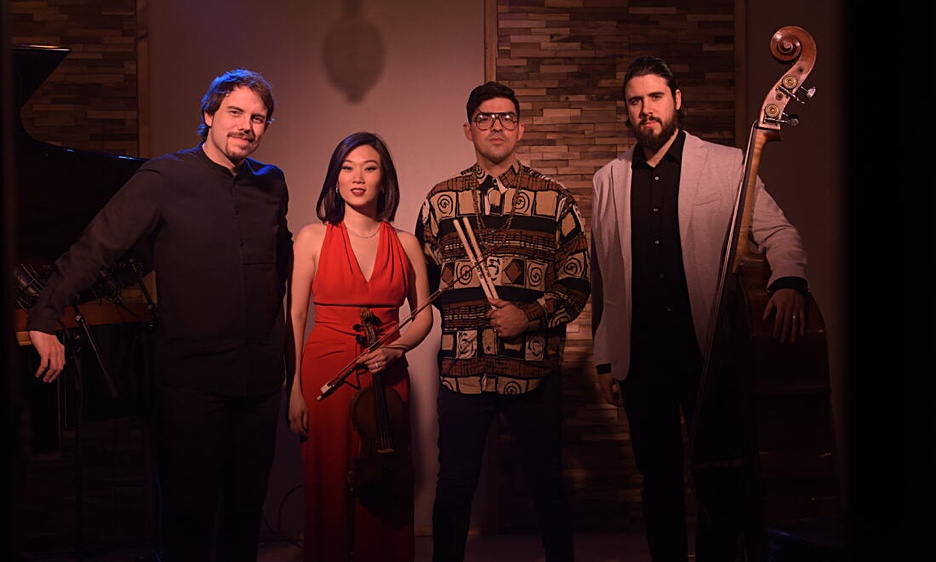 By JIM WORSLEY
July 16, 2019
Sign in to view read count
We live in an era where chit chatting now, most annoyingly, rivals actual listening to the music at many concerts. It is with supreme delight then, that I share my enthralling experience of an evening of musical brilliance that was free of any such boorish clutter. You could have heard a pin drop at Bacchus' Kitchen in Pasadena, California during the Maureen Choi Quartet performance. A virtuoso violinist, Choi, and her bandmates treated an attentive and appreciative audience to two sets of upper echelon fusion. The show was part of the BacchusLIVE series of supper shows presented two nights each week. The upscale Bacchus Kitchen is open other nights only for dinner. I'm not a food critic, but to be fair the word "only" seems a bit sparse. Dinner was superb. I could go on, but the last time I checked this is a jazz website. Bassist Mario Carrillo (also Choi's husband), pianist Daniel Garcia Diego, and drummer Andres Litwin rounded out what is a quartet in the truest sense of the word. Each member brings a broad skill set and the songs are presented as the fused product of a quartet. This, as opposed to the often, and often tiresome, approach of taking turns playing solos.

Offering up eight selections from their most recent release entitled Theia, the consummate quartet opened with the bold and vibrant "Phoenix Borealis." The odyssey featured many changes and rhythmic juxtapositions. Choi alternately glided and soared dynamically throughout. Carrillo demonstrated his own skills with the bow, taking it fiercely to his bass, executing a hard-edged fusion layer that added to the depth and creativity to the Choi penned epic. The subdued "Dance of the Fallen" opens with Choi and Diego entangled in a quiet interlude before more fiery memories of better times past enter the framework. Alas, in the end, the sadness wins out as the dance comes to its conclusion. Choi's vivid expressionism is on display throughout this poignant number. The story was enhanced by a fine percussive entrée by Litwin. Spirits were then lifted, proving once again that "Love is the Answer." Written by Diego, this was a classic mergence of flamenco, classical, and jazz. The quartet was in fine fashion here in relation to the aforementioned togetherness. Choi's softer and elegant brushes climbed into a mood enhancing clip. The first set closed with "Canto Salamanchino." Choi was at one with her quartet, displaying a mature and savvy desire to put music before ego. Led by a spirited piano run by Diego, the quartet peaked in this uplifting piece leaving the audience hungry for more.

After a break for dessert (apricot glazed almond cake, yummy), the quartet returned to the stage with "Dear Paco." Not surprisingly, the well-crafted song was dedicated to the work of legendary virtuoso flamenco guitarist Paco De Lucia. The parallel of both de Lucia and Choi being classically trained artists that later found their calling in the jazz world was not lost on me. Nor was the fact that Choi connected the dots with a symmetry of lines and synergy of unison in this invigorating homage. Drifting into the dark and gracefully to the light in "Sinner's Prayer," Choi exhibits perhaps her finest work. The nuances delicately fluttering with her feel for improvisation. Strongly supported once again by her band, Choi joyously commands center stage. In autumn of the performance, "September, the First" was appropriate. It also was a bittersweet cascade, as if being led though a sad walk amongst the autumn leaves. A somber but delightful melody anchored stoically by Carrillo that later boldly paces and captures an inner strength before the final walk that brings the band to voice in a most heartfelt and sincere manner. The set and show ends with the breathtaking movements of "Danza Ritual del Fuego," a song that once again under the steadfast guidance of Carrillo, gloriously allowed every member of the band to shine and expand their creativity with innovative interplay. Choi magnificently pushed the limits and played vigorously with wonderous passion. The silent, hanging on every note, crowd now showed their exuberance for such a stellar and exhilarating performance.

You may get the impression that I thought this was a great show. That is really not so much the case. It was so much more than that. It was the passion for the music. It was the incredible musicianship. It was the complexities of the compositions. It was a treat, or perhaps a gift, to my ears. It was the energy. It was the discipline. It was extremely high-end fusion. And yes, sure, it was great! Having the pleasure of talking with them after the show I was taken by their genuineness. Mostly, however, it was their passion. The same passion they exuded on the stage was now dripping on their every word. This is the real deal, folks. Twenty-first century fusion that you can hang your hat on.