By Phil Barnes
February 7, 2014
Sign in to view read count 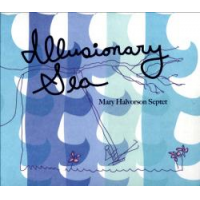 In 2009 Mary Halvorson was asked how relevant she felt that the word 'jazz' was to musicians of her generation. Her response was telling "Oh, I think about jazz all the time and although I don't play the traditional forms, I call myself a 'jazz musician.'.. trying to integrate everything into my own language." The corollary of this is that, while she has clear roots in jazz, Halvorson has assimilated influences from many genres of music and reflects this in the open minded attitude exhibited by her compositions and playing. Its all about what works together rather than simply repeating or repackaging what has been done successfully before.

For this wonderful record she has assembled a phenomenal collective of musicians able to deliver this broad vision, apparently capable of switching between genres and styles at will. Partly this is achieved through the building up of a mutual understanding and trust over many years—Halvorson has played in a trio setting with Hebert and Smith for a considerable period, and for her quintet dates has long augmented them with Finlayson and Irabagon. On this collection Halvorson has further expanded that line-up by adding Ingrid Laubrock on tenor saxophone and Jacob Garchik on trombone, looking to create a 'mini big band' sound to exploit the possibility of four part harmonies offered by the larger ensemble. Such a fine, empathetic, band is essential to follow the twists and turns of these remarkable, yet dense, compositions and both the collective improvisation and the individual soloing evidenced on this collection is fantastic.

Halvorson certainly delivers on her promise of a broad personal musical language, her playing ranging from the more conventional jazz of "Red Sky Still Sea (no.31)" to the extraordinary "Smiles of Great Men (no.34)"'s brutal, angular, post punk opening riff. It wouldn't be fanciful to suggest that the young Polly Harvey would have been proud of this opening statement, but the piece does not rest there with Halvorson shifting the Septet through a couple of sharp changes before returning to that original theme with greater emphasis on the bass notes. This is a deliberate creative preference, Halvorson commenting in the same interview that ..."the bass has always been my favourite instrument, and I hunted down the largest and woodiest guitar I could find to make me sound like a bassist...."

On the title track too Halvorson seems to switch styles at will— ranging from uncomplicated support to the horns to what are almost expressionist Spanish style strummed flourishes. The whole thing works and feels natural throughout though—when control is called for on the winding guitar riff that underpins "Nairam" Halvorson delivers, but she is not afraid to cut loose as on the near metal solo on "Butterfly Orbit (no.32)" or adopt a more conversational style in her closing solo on "Fourth Dimensional Confession (no.41)."

While Halvorson's playing is excellent throughout, it would be remiss not to highlight some of the performances from the other members of the Septet. Take for example Jonathan Finlayson's trumpet solos on "Red Sky Still Sea (no.31)" and "Fourth Dimensional Confession (no.40)," or drummer Ches Smith's rapid reactions to lift "Nairam" —a Philip Catherine piece that is, I believe, the first occasion on which a Halvorson band has released a cover. "Four Pages of Robots (no.30)" is also notable for the interplay between the brass section and the way that Garchik's languid trombone solo unexpectedly shifts the direction of the piece.

The level of improvisational interplay required to make these compositions sing is not to be underestimated and would be fascinating to see in a live environment. Any jazz record with echoes of Movietone's classic The Sand and the Stars, PJ Harvey's Rid of Me and Miles Davis' Nefertiti is clearly to be cherished. But then any music that is simply this good is quite capable of establishing its own reference points. Highly recommended.