By HRAYR ATTARIAN
August 31, 2012
Sign in to view read count 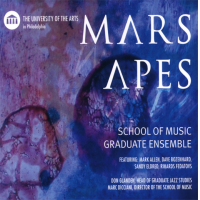 The Philadelphia based University of Arts is famous for the excellence of its school of music and particularly the high caliber of its jazz education. Listening to the whimsically titled Mars Apes, it becomes clear that these accolades are not undeserved.

Billed as School Of Music Graduate Ensemble, the group performs mostly original material by its individual members, on this foray into the uncertain terrain of fusion. The engaging music does not, however, conform to the traditional sense of the style; namely amalgamation of rock and roll structure with jazzy sensibilities. Sure, there are Weather Report-esque moments, as heard on "Hope," where under versatile guitarist Dave Bozenhard's leadership, the rhythm section lays down smooth, rollicking beats. Bozenhard's intelligent solo, with its gorgeous tone and laidback tempo, builds a jam band ambience on his own "Torches." Even these compositions, however, demonstrate elements of other musical expressions. Angular hints of classical modernism pepper the former, while a lilting sonata like structure characterizes the latter.

The classically trained Fedotov not only excels at reinterpreting the Coltrane classic; he also demonstrates his writing chops on such tracks as the funky "ToBeInIt," with Allen's swaggering sax and Bozenhard's bluesy guitar over a bed of soulful R&B-inspired grooves, courtesy of genre-bending electric bassist Sandy Eldred.

Eldred's title tune finds him switching to acoustic contrabass and creating a percussive and hypnotic vibe over which Bozenhard creates cinematic harmonies and Allen introduces a warm poetic touch with hints of melancholy.

No matter how this stimulating album's music is labeled, one thing remains clear: the inherent talent of these four young men, combined with the phenomenal education they have received, has resulted in a uniquely creative work. Hopefully the quartet will record again together—and soon.

About School Of Music Graduate Ensemble