By Charlie B. Dahan
March 1, 2005
Sign in to view read count
March is insane—it is the month of FIVE release dates. So without further adieu, here is your month of March reissues, compilations and special event recordings.

Please go to our Upcoming Release Center at All About Jazz to see all up to date release guide to recordings that are out and those that are on their way.

From Other Labels:
Dexter Gordan Jazz at Magleas High School (Storyville). Recorded live as a jazz clinic at a Swedish high school in 1967. 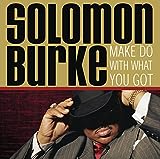 Solomon Burke Make Do with What You Got (Shout! Factory). This is a recording from a golden oldie—I just had to mention it.

From Other Record Labels:
Dianne Reeves Live in Montreal (Image). This DVD was recorded during the Montreal International Jazz Festival.
Nina Simone Fodder on My Wings (Sunnyside). This album was recorded at a concert in Paris in 1982.

From Water Records:
John Simon John Simon's Album. Simon was best known as the producer for The Band and released this recording on Warner Brothers Records in 1971.
Leo Wright Soul Talk. From 1970 release on Atlantic.

I love Music, The Yankees, The Tar Heels and lots of other stuff , I think I watch too much TV.