By HRAYR ATTARIAN
August 6, 2017
Sign in to view read count 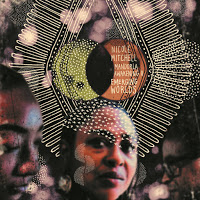 Composer and flutist Nicole Mitchell has released her magnum opus with the provocative and stirring Mandorla Awakening II: Emerging Worlds. The single suite is a musical dramatization of the futuristic allegory that Mitchell wrote for the album. It is a short story set in the year 2099 and is about the symbolic struggle between the decaying and violent old order and the peace and vibrancy of an egalitarian society.

The members of the ensemble build together poignant and kaleidoscopic sonic images with their distinctive expressions that reflect sublime camaraderie and brilliant individuality. The disc opens with percussionist JoVia Armstrong setting a tense and expectant ambience. Her rolling polyrhythms mixed with electronic sound effects propel the first track, "Egoes War." Guitarist Alex Wing adds tension with his otherworldly tones as Mitchell and shakuhachi (Japanese bamboo flute) player Kojiro Umezaki spar as they flitter in and out of the band's riotous group play.

The music seamlessly transitions to "Submission" and its Zen serenity. Mitchell's flute mystically wails over cellist Tomeka Reid's lyrical cello and Armstrong's crashing percussive waves. The tune's quietude is laced with latent angst that is fully expressed in "Chalice" that follows. An eerie and dissonant soundscape coalesces around violinist Renee' Baker's passionate and angular solo.

Although, for obvious reasons, some of Mitchell's works are dubbed Afrofuturist, that may be a superficial label. This recording, even though rooted in the music of Africa and its diaspora, is pan cultural. "Dance of Many Hands" has a Middle Eastern lilt as Umezaki and Mitchell interweave their lines with agility and Reid's strings resonate with warm melancholy.

The overarching theme of this exquisite composition is not about an esoteric tomorrow, it is urgently contemporary. It draws inspiration from the rampant, and sometimes institutionalized, transgressions in today's society both against African-Americans and other people worldwide. Poet and spoken word artist avery r young ardently articulated this in his moving and fiery monologue. The disc concludes with a haunting and cinematic atmosphere that is cautiously hopeful and crackles with dynamic energy.

This is socially engaged art at its best and a creative call for action to all, as fighting for justice is everyone's responsibility. Mandorla Awakening II: Emerging Worlds is not only Mitchell's best work it is a bona fide masterpiece that is simultaneously acutely relevant and brilliantly timeless.