By Eyal Hareuveni
November 29, 2012
Sign in to view read count 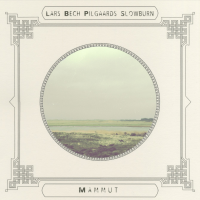 The album's six pieces have suggestive referencing of states of mind, exotic food and distant locations. Pilgaard's guitar sound is raw, brutal and authoritative, and his playing flows intuitively throughout the open-ended pieces. He leads the trio around the spare theme of "Anesthetic," leaving enough room for Andersson and Eiler to interpret the theme. "Agak-Agak" is a free improvisation mixed with wild and noisy sonic searches. The short, gentle and cinematic "Sfântu Gheorghe," named after the Romanian city, introduces the more expressive and articulated melody of "Raketvej," both enjoying Lars Greve's lyrical clarinet playing. "Eneboer" features the trio exploring sounds, shifting patterns and different modes of raw energy through relaxed interplay. The epic "Nørre Nissum," named after a village in west Denmark, begins with disjointed, often repetitive sonic experiments by all three musicians, patiently assembled by Pilgaard into a dark and enigmatic soundscape.