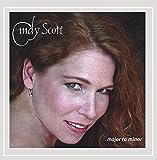 Houston-based vocalist Cindy Scott strikes gold her first time out. Major to Minor is an exceptional debut album, a happy collaboration between an exciting new singer and a cadre of superior jazz artists. This CD is somewhat of a culmination of material that Scott developed with pianist/arranger Gary Norian and other musicians at a steady gig they had at Cïzanne, a noted Houston jazz club.

The function of sidemen, as I see it, is to stimulate, inspire, excite, push, drive, goad and coax their colleagues. And, boy, this band stimulates and pushes Scott. Their efforts, however, do not detract from nor intrude upon her vocals but, rather, enhance and embrace her performance. Norian stated, "We like to keep the integrity of the melody but (play) with some different harmonies and time signatures. They succeed. Each arrangement is fresh, challenging, and most entertaining. Not many budding jazz vocalists could hope to have their first recording date backed by such talented musicians.

The programming is eclectic, ranging from Cole Porter (three tunes) to Ellington, Berlin and McHugh. Thankfully there are no originals, which in many cases can be uninspired. Things start off hot with some dazzling virtuosic scatting by Scott, working in unison with Woody Witt's tenor sax on the Ellington composition "It Don't Mean a Thing If It Ain't Got That Swing. Scott next lends her sunny timbre to the well-known ballad "What'll I Do, thankfully including the beautiful verse. Trumpeter Dennis Dotson takes a splendid chorus on this Irving Berlin evergreen (some of you may recall Dotson from the Woody Herman band).

If I were to pick a favorite tune from this disc, it might be "Get Out of Town. Although Cole Porter wrote this tune in 4/4 time, Scott performs it in 6/8, which adds freshness to a well-worn standard. It starts out with voice and drums and gradually builds until Dotson enters on trumpet. "Nature Boy may not be the best composition, but Scott's version adds luster to a rather uninspired melody. This "Nature Boy is not just a "strange, enchanted boy —he is a funky cat. The song builds in intensity and includes some tour de force drumming by Chuck Payne. Cindy Scott plays with time beautifully on this number.

Most singers perform the lesser-known Jimmy McHugh song "I Just Found Out About Love as a jump tune, but Scott and the band decided to record it as a slow waltz. It works splendidly at this tempo and time signature. On "Ev'ry Time We Say Goodbye, Scott shows that she can also break your heart with a slow ballad. Her easy, patient way with this Cole Porter classic is downright ecstatic. Kudos also to pianist Norian's lovely counter melody on this cut.

Although this is Cindy Scott's first recording, it will certainly not be her last. For she is not only an exceptional new jazz-oriented singer, she is accessible to a wide spectrum of listeners. You don't need a degree in music to understand her singing; all you need is ears. The disc will appeal to fans who appreciate impeccable intonation, an immaculate sense of timing, and emotional interpretations of song lyrics. Scott is a musical artist who delivers fables and stories and vignettes of life and love. But the young lady can also swing you into bad health.