By AAJ Staff
September 8, 2005
Sign in to view read count 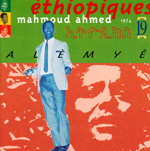 Ethiopian popular music went through an intense creative flowering during the early '70s, cross-referencing traditional styles with jazz, funk, rock, and whatever else could be used to get people moving. Listening to these groups three decades later makes for a weirdly out-of-body/out-of-mind experience. Familiar pop culture elements (vamps, swing, horn fanfares, funky beats) interlace with melodies that sound like they were being sung two thousand years ago. You might be tapping your feet or snapping your fingers a lot of the time, but it still feels strange. Like Hunter S. Thompson's attorney exclaims in Fear and Loathing in Las Vegas,

Admittedly the period's recorded output wasn't that great in numerical terms, totaling about 30 LPs and 500 singles. But it was intense, and it was over quickly, because Emperor Haile Selassie—yes, Rastafarians, that Lion of Lions—fell in 1974. Ethiopia found itself in the iron grip of the revolutionary "committee," which had no interest in people singing or dancing outside their own homes, perhaps even within their own heads, to put it bluntly.

But Amha Records founder Amha Eshèté managed to leave the country just in the nick of time, then made the move in 1987 to resurrect important releases from his label's brief six years of existence for a broader audience. The Buda Musique world music label caught the handoff and has followed through with an inspired Ethiopiques series, each edition featuring hefty bilingual documentation in French and English.

Since an initial 1997 collection spanning the "golden years of modern Ethiopian music" from 1969-75, eighteen sequels have focused attention on specific artists, styles, and moods. They pack a wicked punch—each a time capsule all its own!—so you have to pace yourself carefully, but each one is worth the effort.

Singer Mahmoud Ahmed was the subject of the highly recommended Ethiopiques 6 and 7, devoted to his early and late recordings, respectively, from the period. The new volume 19 fills in the middle ground, offering nine tracks he laid down with the mid-sized Ibex Band in 1974. At times hypnotic, at others just plain groovy, this music is completely centered on melody. Whether Ahmed is backed by fast riffing shuffles, cycling mid-tempo cascades, or dramatic legato atmospheres, he makes phrasing connections that work. Sometimes the band does some amazing things, too.

The opening track, a funky jam with a prominent tenor saxophone in the mix, finds the singer lilting recklessly into melismatic phrases that are oddly conversational in cadence. His delivery goes into overdrive when he applies an intense vibrato, mostly to mark the end of phrases or to accent twists along the way. The dreamier "Wègènié" echoes a certain loungey presence marked by resonant held tones on organ and guitars. Things get down (and I mean down!) with the layers of funky rocking drums that drive the next tune, second only to the raw backbeat bounce of "Nèy dènun tesèsh" further along the road.

Most of these songs are in the four to seven-minute range, but the closing psychedelic "Tezeta" clocks in at 12:29, which is in good proportion to its expansive mindspace and paced progression. The tenor saxophone returns with a much more fragile, almost broken tone, forging all sorts of natural-sounding links between the singer and the other instrumentalists.