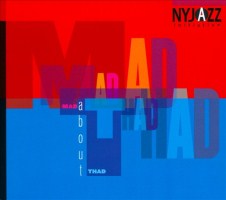 Twenty five years have come and gone since Thad Jones' passing, but interest in his music has never waned. Audiences composed of faithful fans and those new to his work still flock en masse to the Village Vanguard on Monday nights to witness the Vanguard Jazz Orchestra exploring his legacy on the very stage where the trumpeter first brought many of his compositions to life. While a good number of Jones' peers have passed on, those who remain still perform and record his music with the utmost care and respect, as demonstrated on One More: Music Of Thad Jones (IPO, 2005) and One More: The Summary-Music Of Thad Jones, Vol. 2 (IPO, 2007), and subsequent generations of jazz artists continue to keep his work alive with albums like Mad About Thad.

In many ways, the collection of musicians who make up this band reflect the very goals of the organization they represent. The NYJAZZ Initiative was founded in 2008 and aims to keep jazz alive and thriving through education and performance, creating a climate of positive energy around jazz education and promoting the on-the-bandstand learning style that helped so many artists reach their potential. With this in mind, it's nice to see that practice what they preach, with Vanguard stalwart Ralph Lalama providing a direct connection to Jones for the younger musicians in the group.

The eight tracks on the program cover well-worn classics ("A Child Is Born") and material that's often overlooked ("Evol Deklaw Ni"), and the band manages to be faithful to Jones' vision, while remaining creative with the arrangements and avoiding slavish imitation. The pas de deux between Rob Derke's soprano saxophone and Sam Burtis' tuba brings out the best in "Bird Song" and the horn writing on "Elusive" makes this band sound far bigger than they actually are. Six other tracks reside between those two pieces, and each one offers great musical riches. "Three And One" seamlessly moves between an odd-metered Latin groove and straight swing in four and "A Child Is Born" provides pause to admire trumpeter David Smith's unique phrasing. Burtis and bassist Carlo De Rosa are in cahoots at the outset of "Evol Deklaw Ni," and both men burn on their respective solo spots. With performances like these, plenty of people will be extremely happy that the NYJAZZ Initiative took the time to put together Mad About Thad.