By DOUG COLLETTE
November 5, 2007
Sign in to view read count 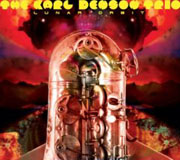 The Karl Denson Trio's Lunar Orbit is the perfect title because it conjures visions of space and time in an apt musical metaphor. The sound of the album spans eras of style, these musicians revivifying what is all- too-often merely flat or formulaic

There's a great atmosphere to this CD right from the start, and it only deepens as the tracks progress. Textures abound in the contrast of horns, percussion and organ on "Plain Truth, and warmth permeates even the electronic keyboards in a seductive way. The way that cut honks into motion is a good example of how the sequencing creates the illusion of one extended jam session.

Accordingly, an element of the unpredictable also permeates Lunar Orbit, most obviously in the playing of the leader. His use of flute on the title song catches by surprise since sax is his main axe, but a return to flute near the end of the album imparts continuity. "Break Me Down illustrates the lessons Denson's learned playing with likes of The Allman Brothers Band, Gov't Mule and Medeski, Martin and Wood, as well as his other projects including The Greyboy Allstars and Tiny Universe.

Likewise, "Ghetto Fireworks makes it clear he's listened to Rahsaan Roland Kirk. The way the musicians interact as a unit recalls classic organ ensembles of the fifties. "Won't Somebody demonstrates how Denson and co. avoid playing it safe—you know the sax is going to enter after a few pumps of the organ, but are seduced by the transition anyway. Likewise, as the group toys with the melody line, they never succumb to merely playing it, but play with it—can you hear the tease of "Come and Get Your Love ?

There is nothing static about this music, despite what seems to be a conscious decision to keep it simple. With rhythm permeating everything he plays, Denson is nothing if not a humble yet confident bandleader. He allows more than ample space for keyboardists Kenneth Crouch, Will Blades and Anthony Smith to solo. Seven musicians participate in this recording overall, yet the chemistry's maintained throughout. The most extended track, "Appointment Only, suggests what a treat it'd be to see this group live, but it's a testament to the durability of the music, and the pure sound of this recording, that seeing KD3 would not make Lunar Orbit obsolete.