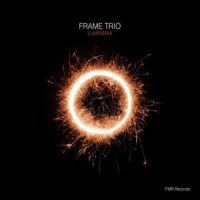 With freely improvised music, you have to trust that the performers will take you somewhere you want to go and that the journey itself will be as worthwhile as the destination, if not more so. Those expectations are more than met by the Frame Trio on Luminária, the first album by the collective of trumpeter Luis Vicente, guitarist Marcelo Dos Reis and bassist Nils Vermeulen. Both bastions of the Portuguese creative music scene, Vicente and dos Reis share a common outlook and have appeared together under multiple banners, notably with Chamber 4 on their eponymous debut (FMR, 2015) and the follow up City Of Light (Clean Feed, 2017).

As an active concert promoter and label boss, it is perhaps not a surprise that dos Reis also brings organization to the off-the-map goings on. In many cases he holds everything together in singular style but without resort to virtuosity, using minimalist reiterations to form a unifying thread, exemplified by his repeated rattle on a single dampened string on "Luminária 3" or his insistent harsh bowing of the guitar, which establishes the mood for the tense "Luminária 5."

Even though the parts are strong, it would count for nothing unless they meshed together. And that is the strength of the Frame Trio; three disparate voices unite to fashion complex, difficult-to-describe atmospheres, like that in "Luminária 1" where Vicente's beautiful, breathy sustains edge into distortion, in contrast to dos Reis' metallic chiming and flurries of pizzicato bass, phrasing together and pausing together as if a single organism. Such effects are commonplace throughout this captivating recording which excels in both the travelling and arriving.