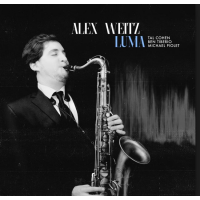 Saxophonist Alex Weitz releases his second album as leader entitled, Luma. The Miami-based saxophonist and composer creates a unique sound, even though he is a youthful twenty-five years of age. Weitz is joined by pianist Tal Cohen, bassist Ben Tiberio, and drummer Michael Piolet. Luma is a collection of nine tracks that are full of peaks, valleys, unexpected twists and turns, and exceptional solos, with solid group interactions. Above all else, there is a sense of trust and camaraderie between these four musicians that is undeniable.

The album starts out with "Did You Know," a medium-tempo selection that immediately establishes Weitz' big warm saxophone sound. The conversation between Weitz and drummer Piolet during Weitz' solo is excellent and exhibits great maturity in his playing. "Outer Noise" is a meaningful composition that displays the groups cohesion and uniformity of sound during the tutti sections of the melody. Weitz' solo builds over the driving force of Piolet and Tiberio with Cohen placing encouraging chords. The quartet delivers a cohesive statement that is first rate and above all, musical.

The duet with Cohen entitled "Luma" has a beautifully haunting melody. Weitz' clear and melodic approach to his improvisation is a further testament to his capability as a player. A fact that is showcased throughout the record with all of his solo statements. "Equilibrium" starts with the rich bass sonorities of Tiberio that leads to the melody and immediately dives into a group improvisation. Weitz' compositions successfully utilize deception, usually by doing the exact opposite of what's expected, but he always delivers the musical goods. This selection demonstrates the conversational nature of the quartet and Weitz' upper register work is first-rate.

The communication between the four players must be noted, as they are always playing off each other's musical thoughts by referencing what the other played before. Piolet does a great job of keeping the intensity high, while not being overbearing his fellow players. Balance is key for most group improvisation to work, and Luma executes this at a superlative level. Overall, the nine selections are well thought-out and performed with succinct execution. Luma contains conversations not only between four musicians who have a mutual respect, but also musicians that clearly have a deep rapport off the bandstand. Their exchanges are free flowing with a range that can change from light-hearted to muscular and edgy in an instant. Weitz has put together a consummate release with Luma; I am predicting he will be one to watch as his career continues.