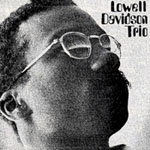 Lowell Davidson was one of those quintessential artists. A pianist possessed of great virtuosity, he was also a Harvard-educated biochemist and his musical art—both compositions and performance—and emerged from a confluence of the two. Davidson inhabited a rarified space. He understood and played with such harmonic sophistication that he may be compared in this respect only to Thelonious Monk, Herbie Nichols and Don Pullen. As a scientist-musician he believed that musical tones, if properly employed, could influence the evolution of the brain. That was in the 1960s, when he was active in plying his art. Sadly, this record, Lowell Davidson Trio remains the only recorded document of this remarkably gifted musician. And it might never have happened had Ornette Coleman not recommended that Bernard Stollman put give Davidson the opportunity to make this unique musical statement.

The music on this record, in particular Davidson's compositions and his pianoforte is complete in every sense and would have been as remarkable as the bebop phraseology of someone like Bird, when both were first heard. Almost mimicking the human voice that is singing in short thrilling phrases, Davidson's songs are like vocal necklaces comprising gorgeous gem-like beads of notes in elaborately decorative chains of provocative combinations. Strung together almost endlessly in hitherto unheard of designs, the music strikes the consciousness as the soft felt of the hammers of the piano are tapping in the nerves of the brain just as they do the myriad and perfectly tuned strings inside the body of the piano. Davidson can be elegant, as on "L," elegant and majestic on "Stately 1" childlike and playful on "Dunce" and "Ad Hoc" and almost like a chorister on "Strong Tears." In that respect, this is a definitive work that captures in essence the entire pianist's beliefs and channels them through a many emotions in these songs.

The composition of the trio is also quite inspired. There appears to have been a symbiotic relationship between the other players—bassist, Gary Peacock, percussionist, Milford Graves—and the pianist. Davidson's superior harmonic sense is beautifully reflected in the manner in which Graves, for instance, employs dynamics to explore tonal colors and rhythmic textures. Although he displays this exquisite sensibility throughout very good examples of this are heard on "L" and "Stately." Peacock achieves no less a state of rarified elegance playing both pizzicato and con arco, especially on "Ad Hoc." Note his and Graves' rumbling bass, punctuated by bright splashes on various cymbals, a perfect foil for Davidson's complex forays into the heart of the song's theme.

Although it is nearly impossible to single out any on song that defines the album, one might hazard a guess that this is "Stately 1," where Davidson is statuesque and often pirouettes, making his solos almost like ballet. In retrospect it may very well be likely that this record is so intuitively complete that it is very likely there may never have been a possibility of another recording by this artist.