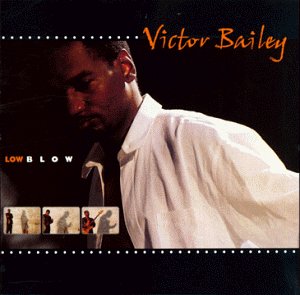 With this great CD, bassist Victor Bailey, alumnus of Weather Report and Steps Ahead and currently bassist for the Joe Zawinul Syndicate, reinforces his standing among the bass elite. Bailey liberates the electric bass from its traditional background role as the harmonic and rhythmic foundation of a band and demonstrates its capabilities as a lead and solo voice.  One of Bailey's goals for this recording was to demonstrate that he's not just a bassist, but a complete composer/musician who just happens to specialize in the bass.  He's successful in this endeavor.  There's plenty of bass virtuosity, to be sure, but its never just an in-your-face chops exhibition.

The music, almost all of it composed by Bailey, sits comfortably in the space between contemporary jazz and fusion.  This is one of those albums that you can tell is a labor of love for the artist, where he really writes and performs what comes from his heart rather than what the record label or a particular format dictates.  You'll detect the Weather Report/Jaco Pastorius influence in several spots, such as the opener.   A highlight is his vocalese version of Jaco Pastorius' "Continuum."   Bailey transcribed this tune when he was sixteen and practiced it relentlessly for years.  He wrote the lyrics in one creative burst about a week after Jaco died.   Bailey's acrobatic vocals follow the bass line perfectly. Bailey also impresses with his scat vocals on the opening and closing tunes, perfectly in tandem with his lightning bass lines.  "Graham Cracker" is a tribute to another bassist who was an influence on Bailey:  Larry Graham.  The album's softer, gentler moments are enjoyable, too, such as the trio rendition of "Babytalk" (co-composed with Regina Carter), and "Feels Like a Hug," in which he picks the bass like an acoustic guitar, and renders an impressive solo using the two-handed tapping technique.

The supporting cast is excellent.  With frequent band mate Omar Hakim or the energetic Dennis Chambers on drums, there's never a question that the time and the groove will be there.  Chambers' solo on the closer is nothing short of explosive.   Both Bill Evans and Kenny Garrett provide the perfect foil on soprano sax for Bailey's bass.  Guitarist Wayne Krantz turns in some good solos.  The keyboardists Jim Beard or Michael Bearden excel at both soloing and comping, often lending a more organic feel on the Rhodes or Wurlitzer electric piano or grand piano.  (Zebra ZD 44020)